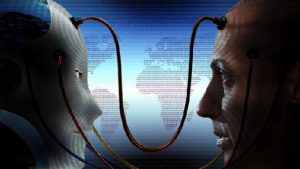 Modern scientists claim that they have already determined the directions that will enable humanity to make a breakthrough into its radiant future: nanomaterials, smart houses, travelling to other planets, cloning various creatures, storing information in DNA-like media, artificial intelligence, robots and biorobots, studying ocean depths and the depths of Space…

I dare say that most of the state-of-the-art technologies created today are so significant that their creators may erroneously believe that it is the development of these technologies that will allow their owners to “rule ‘Our’ World” in the nearest future.

It is not because these technologies are harmful, but solely because people use the fruits of any technological revolution primarily for such purposes as arms race, seizures of power, turning people into ‘zombies’, etc.

Invention of a wheel and a knife proved to be a much less dangerous technology for humans than creation of new viruses and bacteria, climate and chemical weapons over the past 100 years. And most importantly, the inventors (creators) of these technologies are not able to prevent such use in any way.

Many modern researchers realize the current situation and consider it to be hopeless so far, since up to the present there have not been found any acceptable solutions for mankind’s exit from its “nosedive” to death…

While investigating prospects for development of the mankind, I carried out many imaginary experiments, and as a result I “saw” the following main causes of this problem:

The result obtained in this experiment clearly showed thatno technological improvements of human bodies and the environment of these bodies are able to change the people’s attitude towards the Nature (the Universe) and to all its inhabitants, including their own species…

That is why, it is not the body of a person that should be “altered” – it is, first of all, people’s worldview, way of thinking, meaning of their lives. Change of the outlook will automatically lead to replacement of current dominant values ​​(money, power, fame…) with new ones, such as harmonious relations with the objects of the Universe and with all its inhabitants. These new values will determine behavior of people and their social relations in the long run. On this basis, the direction of the modern mankind’s development will change automatically.

“You are looking into the interlocutor’s eyes and realize that a bag of meat and bones cannot radiate an intelligent look. You see the flesh, but you communicate with an invisible spiritual essence.”  Yuri Larichev, writer and philosopher

Obtaining a strictly scientific proof of immortality of a human Personality and its consciousness and disclosing it to the general public (by means of demonstrating so-called ‘miracles’) should become the cornerstone of this crucial task.

At present, due to the conservatism of the official science, even studies in these areas are considered absurd, and any publications on such topics in scientific journals are kind of a taboo and are considered “undesirable”…

“The consciousness, which is already transforming and organizing a hefty chunk of “our” solar system, is denied objective existence only because traditional science doesn’t know how to approach it, didn’t create an appropriate conceptual apparatus and scientific tools for its study, and it is in no hurry to correct these mistakes and to overcome the arising difficulties.”  George Somov, “Matter of Consciousness & Consciousness of Matter (Материя Сознания и Сознание Материи)“

This situation has led to the fact that even ‘crazy investors’ “do not see the advisability” of investments in this field. Investing in human development has become completely unprofitable, as the payback period can reach 30-60 years. Investors don’t realize that they themselves are blocking the most promising areas of investment in the history of “modern mankind”.

“If there is no immortality, then neither is the remorality: all is permitted.”  Vladimir Bekhterev,  “Immortality From the Scientific Point of View”

“It sounded an excellent plan, no doubt, and very neatly and simply arranged; the only difficulty was, that she had not the smallest idea how to set about it…” Lewis Carroll, “Alice in Wonderland”

I do have an idea how to.

END_OF_DOCUMENT_TOKEN_TO_BE_REPLACED

In this article, the author gives definitions of such notions as consciousness, sub-consciousness, being and entity for any biological or non-biological objects. He also considers these notions in relation to computer systems. Different approaches to objective estimation of various objects’ consciousnesses are also suggested. Besides, the writer offers the way to determine the exact point when a conscious object turns into a being or an entity.

Disputes over the interpretation of such notions as consciousness, subconsciousness and a being have been taking place throughout the history of the so-called modern humankind and provoke people’s interest up to this day. Nowadays these debates have reached their climax.

Scientists from various research centers actively develop different structures (e.g. devices, robots, mechanisms, and so on), which, as they claim, possess artificial intelligence.

So, now – like never before – there is a need to formulate unified terminology and related nomenclature, which will be used within various areas of research, such as artificial intelligence, robotics, biocybernetics, computer systems, etc. It will help modern researchers to find a common language, which, in its turn, will contribute toward development of the technologies that will benefit the whole humankind.

I think that the future of the modern humankind is tightly intertwined with answers to such questions as “What are consciousness and subconsciousness?”, “What is a Being?”

This paper is devoted to finding answers to these questions.

“There is a conceptual gap between science, which stands for objective measurement and the conclusions we can draw thereby, and consciousness, which is a synonym for subjective experience. We obviously cannot simply ask an entity in question, “Are you conscious?” If we look inside its “head,” biological or otherwise, to ascertain that, then we would have to make philosophical assumptions in determining what it is that we are looking for. The question as to whether or not an entity is conscious is therefore not a scientific one. Based on this, some observers go on to question whether consciousness itself has any basis in reality.” [1] Ray Kurzweil

“Proposals have been regularly presented that purport to be scientific theories linking consciousness to some measurable physical attribute — what Searle refers to as the “mechanism for causing consciousness.” [1] Ray Kurzweil

“As British psychologist and writer Stuart Sutherland (1927–1998) wrote in the International Dictionary of Psychology, “Consciousness is a fascinating but elusive phenomenon; it is impossible to specify what it is, what it does, or why it evolved.” [1] Ray Kurzweil