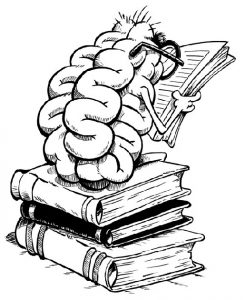 I want to pay your attention that there is a slight difference between my terms and the modern scientific ones. From my point of view, it allows us to see cognitive process in a more realistic light …

The MIND is a set of «thinking» abilities of the Brain (a set of Brain Powers), which enable the Body and the Personality of a Human Being to effectively process information during cognition, i.e.:

This set of abilities we call as “capacities of thinking”.  People who are able to effectively think, have always been called “thinkers”.

MIND is the objective characteristic (a set of parameters) of an object, which can be accurately measured, using the appropriate techniques.

CONSCIOUSNESS is the objective characteristic (parameter) of an object. Consciousness can be accurately measured, using the appropriate techniques.

But there are objects that we call «creatures». They are able both to systematize information about the outside World and to use their «experience and knowledge» (their consciousness) in their activities.

REASON is the integral ability of Beings to use the accumulated «experience and knowledge» in their activities; it is this ability that distinguishes them from objects which are simply conscious. If the Beings have “reason”, they will possess abilities to analyze, abstract, generalize, logically think …

That is why «creatures» at all times were called “reasonable“, that is experienced, knowledgeable. And their activity was also considered to be “reasonable“.

INTELLIGENCE  is a property of an object that characterizes its ability to cognize the World (in the broadest sense of this word) by a heuristic method based on the object’s:

INTELLECTUAL is the characteristic of a Being with excellent «cogitative» («thinking») abilities, great knowledge and personal experience, which ultimately allows him to take more correct decisions in his activity.


But intellect can also be expressed mathematically as a variable that changes in time and depends on three main variable functions:

Thus, «intelligence» is the variable in time objective characteristic (parameter) of an object; it can be accurately measured, using the appropriate techniques.

P.S.
Of course, everything I’ve mentioned above is a very simplified model for defining “intelligence” of any Being. But this model really works. Its effectiveness differs it from all the rest models existing nowadays.