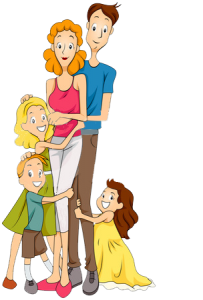 “It is an heretic that makes the fire, Not she which burns in’t.”
William Shakespeare

Let’s begin with the terminology.

BLOOD RELATIONSHIP is relation between individuals on the basis of their common ancestry.

RELATIVES are individuals related to each other.

In order to clarify this situation, we change a little bit the question in the title of this post and try to answer it:

What is the question, actually?

“We are such stuff as dreams are made on…”
William Shakespeare

While giving consideration to people, we are obliged to perceive them as individuals, i.e. as complex objects, each of which has the unique material Body and the unique field Personality. Yes, it’s a very simplified approach, but it will allow my readers to take a completely different look at the human beings.

One may state that all the family ties of people are two separate and independent lines:

Every reader understands family ties due to the material Body, since they are connected with parents, grandparents, etc. As a rule, these connections determine the appearance of a child’s body, the color of his eyes, the shape of the parts of his body, hereditary diseases …

Very few people understand family ties due to “Ourselves” that have incarnated into our material bodies. We manifest these “Selves” as the Personalities. There are other deeper family ties …

So, it turns out that

So, back to the question in our title …

Whether or not our children are our relatives? More correct answers are as follows:

“A man and a woman create child without knowledge of the functioning of a human being body, his brain and consciousness capacity…
Do not have a sense of grandeur about yourself and remember: your child is a soul trusted to you for a temporary care taking.”
Yuri Larichev (Russian Cyrillic: Юрий Ларичев)
“Slavic Veda. The Hermetic Philosophy in a Comprehensible Format. The Gospel for Myself.”

Actually, this topic is more complicated.

I hope my readers aren’t confused by the fact that many personal computers with the same hardware and the same versions of one and the same operating system being installed have nothing to do with the operations their users perform, using these devices.

“All the world’s a stage,
And all the men and women, merely Players;
They have their Exits and their Entrances,
And one man in his time playes many parts,..”
William Shakespeare (1599 или 1600)