Thus, we take on writing of the long-awaited article that is devoted to the analysis of the most evasive part of a human being — his “Self”. Readers may conceive the information of this article like fantastic one. Therefore, it is strongly recommended for readers to follow the offered by the author materials in a strict sequence: from Part #1 to Part #5. It is all for a better understanding of this article information. It is with this sequence the author’s thoughts will be clear for readers and they could develop the full picture of the INCARNATION procedure.

The presented in the article materials give qualified radio engineers possibility to revise the author’s hypothesis and to confirm its veracity.

The author wrote more simply for readers better understanding of the information presented. He used all the terms in accordance with the notions that were mentioned in “The New Cosmic Philosophy” book series.

So, let’s get started.

The author published infographics of the installation process in his “Computer system and its ‘Self’” article. Any IT specialist says for sure that everything depicted there is “functional”, i.e. the part of depicted information is already “turned into reality” or can be “turned into reality” as soon as possible. Let’s try to transform a little bit this diagram by changing some of the devices for the new ones. In this case, the general view of the infographics and the general idea of the ENCARNATION procedure remain the same. Why it is so, the reader will find out at the end of the article.

And here is what we have: 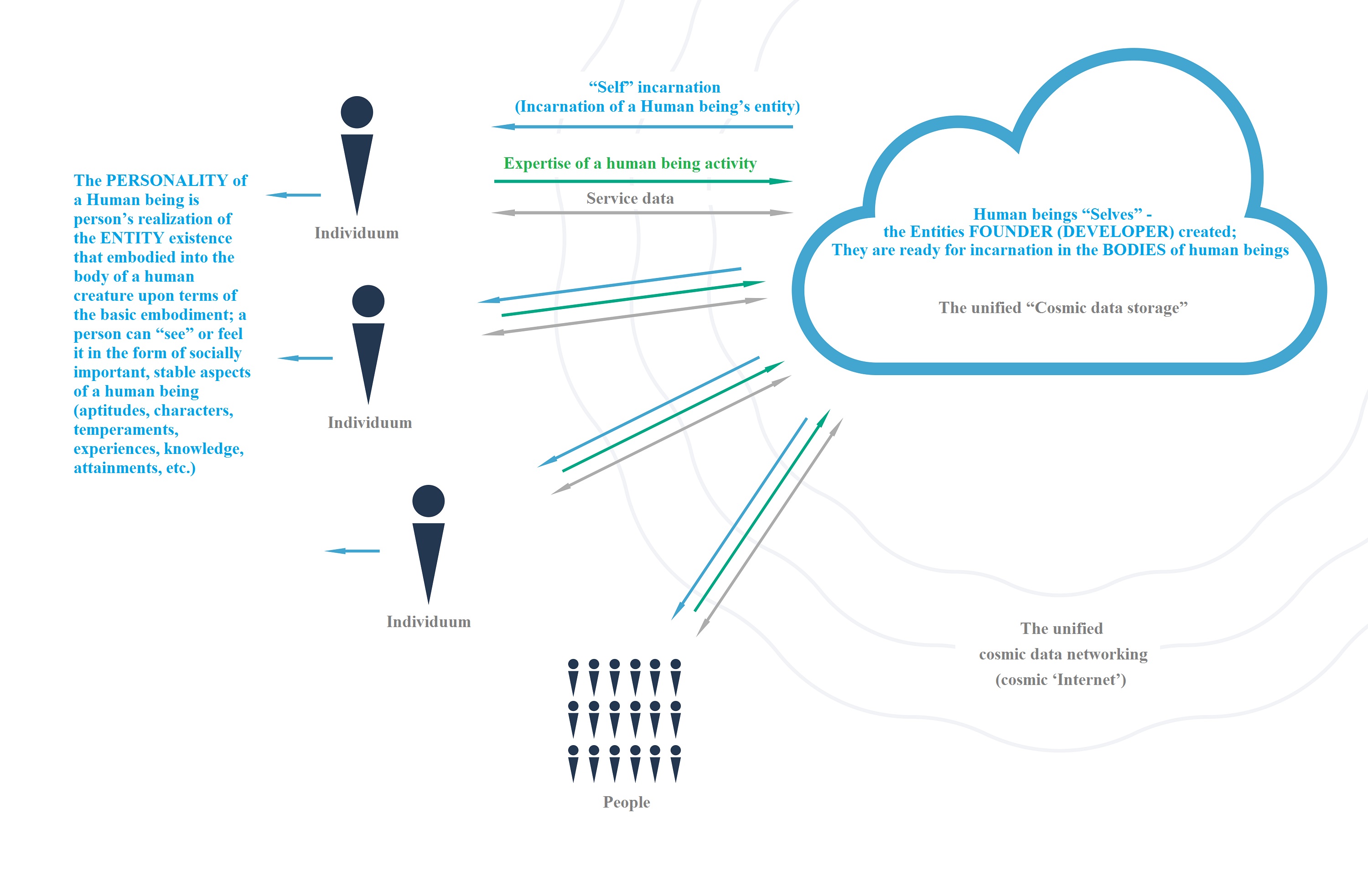 INDIVIDUUM is the conventional name of a human being who has individuality, i.e. unique BODY and unique PERSONALITY. (The analogue is a computer that has unique hardware and software, i.e. with the installed and customized operating system).

A HUMAN BEING is an object consisting of the flesh of a human being, the flesh of the main embodied object and of a lot conventionally “visible” and “invisible” bodies of the objects (entities, creatures, organisms, biospheres…) that have chosen a body of a human being for their inhabiting. (The analogue is a certain computer or computing device consisting of a set of “visible” hardware modules, of a set of “visible” installed applications, a lot of “invisible” operating systems and installed specialized programs).

THE BODY OF A HUMAN BEING is the conventional name of an object. Its task is to be a living place for its “Self” that is the ENTITY of a human being. This entity will penetrate into this “Self” upon terms of the main embodiment.  (The analogue is the computer hardware).

ENTITY is a subjective characteristic of an object whose body is based on a matted form differing from known to us matter that can cognize the World (in the broadest sense) by perceiving it. (The analogue is the self–developing computer program)

The “Self” of a human being is the synonym to the ENTITY of a human being. (The analogue is the operating system for installation on a certain computer or computing device)

PERSONALITY of a human being is person’s realization of the ENTITY existence that embodied into the body of a human creature upon terms of the basic embodiment; a person can “see” or feel it in the form of socially important, stable aspects of a human being (aptitudes, characters, temperaments, experiences, knowledge, attainments, etc.). (The analogue is the user’s realization of computer’s “compatibility options” that is result of the installation and operation of its operating system)

COSMIC DATA STORAGE (COSMIC MEDIA) is the external MEMORY of all “Selves” and, as a result, of all the PERSONALITIES of human beings. (The analogue is “cloud data storage” or “cloud”)

LIFE CYCLE is a period of time from the moment a person decided to create an object and until the object does things on his own. (The analogue is “warranty period of computer usage”)

I would like to draw your attention to the fact that such terms as data processing machine, main memory, system administrators, operating system and biocomputers human being uses as understandable for readers ANALOGIES, but not as SYNONYMS of the objects under consideration.

We propose you to consider the activity of a human being as the functioning of the most complicated “bio-robot-biocomputer” that is based on “programmable matter” and consisting of a number of components, the main of them are listed below:

«I discovered a sphere of mind, which includes with the etheric shell of the Earth.
And soon you will be able to personally read your poems to Homer, and I will discuss my discoveries with Archimedes himself.”
Nikola Tesla
“Herold Tribune” interview, 1934

If a human being functions as a “bio-robot””— a “biocomputer”, so, who is the user (operator) of a human Creature?

The answer is clear … Just like with computer systems, the biocomputer user is his Creator (Developer). CREATOR (DEVELOPER) is a person who creates (develops) an object.

So, everything, as it may seem rather fantastic, looks like this: 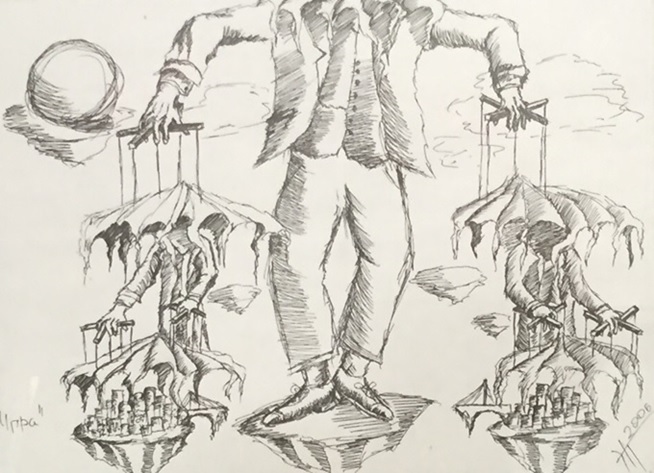 People got acquainted with COMPUTER SINGULARITY long time ago, they are self-developing “biocomputers” creating by “Our” Creator on the basis of artificial intelligence algorithms of a high complexity level.

Why is the term “our” quoted? Because the Creator is not quite “our” … These are we altogether “his” …

INCARNATION is one of the main Universe processes. The interaction of any objects is directly related to the INCARNATION process (procedure).

In more detail the theory of immaterial objects’ bodies and the principles of their interaction with bodies of material objects will be considered in the Volume  XXIV “Space and Time” and in the Volume XXXII “Information and Energy ” of  “The New Cosmic Philosophy” series, the publication of which is expected to be soon.

Where does humanity go?

If the HUMANITY is able to achieve the goals set by CREATOR (DEVELOPER), it is allowed to evolve further. If not, one object (tool) is replaced with another (the experiment stops and a new one begins …).

“Someone tends the flock that is Humanity. Who is our immediate shepherd? Whom should we say “thank you” for our happy childhood? Do not you like cosmic subordination? Do you wait for highly developed guests, but on equal terms? And where and when was a man on equal terms even with his own kind? Of course, it is easier to accept the possibility of separate contacts as the coming, as well as the leaving one. Bow even to the secret “residencies”. But it is too much to think of the world control and power system! Who then we are – with our parliaments and kings, with ZhEKs, cosmodromes and jury courts?

Do not be deceived by the fact that they are not visible. Did many citizens have possibility to see their rulers before TV invention? But no one doubted their dignified existence! There were rescripts, regulations, laws from the noble people, governors and voivodes were nominated and booted out.

The coachman is far away, but the reins are here! But where are the Teachers of the mankind? Where are you, invisible and wise Keepers? Au-y!!! There is no one. Sometimes, some connection appears. And if you give a pull on it, it will break with the most cutting sound …

POINT OF VIEW is thought a certain person forms during COGITATIVE process in a certain period of time. This person uses a particular body as a tool for demonstration (perception).

COMPUTER SINGULARITY is a time period when a person begins self-improvement without physical assistance.