“If divided the world into “Self” and “non-Self“, how is the “Self” reflected in the “non-Self” in a self-discovery? How does the Cognizing become Cognizant? When I look in the mirror, I can see everything cognizant there: stars, clouds, my jacket, my hand, my face, my whole body, all “non-Selves”, but I will never see cognizing “Self” on principle. Is it possible to follow the boundary between “Self” and “non-Self” all the way through? Where is exactly the common boundary of their extension in space and in time? Does it exist?”

“Obviously, there is the World, obviously, there is “Self” that is a part of this World, this entity realizes everything. The huge world consists of a huge number of small parts, some forces influence these particles, gravitational, electromagnetic forces, these interaction forces functionate with the help of special fields. Everything is moving and changing continuously in time and space, the world is infinite. Special ways of organized matter movement are living objects, a product of highly organized activity of organic matter – sensation and thinking. The human brain has ability to correctly reflect the objective reality of the world, practice is the provement of this. Everything happens for a reason in the world, every action has its consequences, all phenomena are links in a continuous chain of deterministic sequence. The outside world impacts on my body and my psyche; myself changes the course of coming events to a certain extent by interacting with the outside world. I have will except consciousness, my will determines my actions along with ambient factors of the environment, so my personality is in close connection with the world, with moral and immoral things, with good and evil.”

“I think that myself consists of many cells, these cells consist of molecules, molecules of atoms, which in their turn consist of “elementary” particles. My body is entirely formed from natural matter and it is a complex quasi stable conglomerate matter having special structure. My cognizant consciousness (my “Self”) is in my cognizant body. When the “Self” entity looks in the mirror, it sees there not its “Self”, the cognizing subject, but only its body, the cognizant object. And no matter how carefully and in detail a person (the body of its “Self”) looked at this object by using any ultra-magnifiers, ultra-analyzers and ultra-loops of time, the “Self” can find only emptiness there, a vacuum of physical fields changing all the time due to the flow of altering caravans of the smallest dead matter particles. For a certain period of time these particles replace each other in more or less stable quantity and proportions. These particles are collected by bendy paths from great distances to the area, in my opinion, where my body is. They crowd there like in the public thoroughfare, still remaining strangers for each other. This is a kind of composite dipole, the swarms of nucleons, electrons and other particles flow into and out. In this cycle, it is impossible to determine the boundaries of our body neither in space, nor in time. Here is some stable, wandering for a billion years hydrogen atom that found himself over the ocean last year and fell into the sea within a rain drop. By the will of fate, he found himself in the body of herring, which was caught, canned and brought to the store. I bought a given hydrogen atom there, brought it home and swallowed, but while it is undigested in the stomach, it did not become a part of my body. It has been belonging to the sphere of “non-Self” for a billion years.”

Now there are some processes we can observe in our “ultra-indicator” as the spinning of this atom in some particles structure, then in the structure of other molecules. All these particles and molecules, without exception, are of the same origin as the early hydrogen atom, they are here for a very short period of time. There is nothing special in the temporary interaction of these particles – physical-chemical substitutions and bonds, mechanical interactions alternate in accordance with the natural matter rules.

My hydrogen atom has the same structure as the other nearby hydrogen atoms, and other particles are indistinguishable from similar particles around. One cannot determine specific location and movement of subatomic particles in this cycle, even in our imaginary “ultra-indicator”. The larger this imaginary increase is, the less hope that we can understand the reason why these dead protons, neutrons, and electrons realized their existence, realized that there are other protons, neutrons, electrons that are not a part of them, but in spite of it, they exist.

For some time, the ever-wandering roamers visit my body, after their leaving my “Self” stops existing without realizing itself as a cognizing subject or as a cognizant object.

Why do many wanderers consider them as “Selves” for a time they are at this assembly point of pilgrimage, and they are not already “Selves” at the other point? Why do they belong before and after gathering to the sphere of “non-Selves” during the gathering to the bodily “non-Self” sphere, and to the spiritual sphere of the cognizing “Self”? How one can specify the boundary between the “Self” and “non-Self”, between the subject and the object in space, as well as in time.

As a result, the described above picture is so clear and natural at first sight, but broadly, it was completely incomprehensible and certainly false.”

“The world is divided into two unequal, but essentially different parts in our subjective view: “Self” and “non-Self “, they are Everything. The world is a sub base including all existent, existed and that will exist. The World contains everything, nothing exists neither in the past, nor in the future outside it. This totality is tantamount to the uniqueness of the World, there is One, It is everything.

If we can localize our personality, our “Selves” in this vast cycle of matter among the transformations of the “non-Selves” parts under epochs and in the expanses, then where is the boundary between the “Self” and “non-Self” in space and time? There must exist such a boundary separating the parts of the whole from all the rest. However, it turned out that one cannot determine such boundaries neither in space, nor in time, despite the fact that obviously, I am here in this room, and not in the next room, not on Mars or Sirius, I am here now, but not tomorrow and not in the Paleolithic age.

I think that myself consists of many cells, these cells consist of molecules, molecules of atoms, which in their turn consist of “elementary” particles. My body is entirely formed from natural matter and it is a complex quasi stable conglomerate matter having special structure. However, as you know, life is possible only with the constant metabolism of the body, it is established that about 10% of a man body is substituted annually, a half of his body will be substituted within five years, and after ten years the body structure will be completely renewed. Thus, different cells, being in different organs, replace the atoms of their molecules at different times, our body is to some extent more like a rainbow the rain drops fly through all the time than a house consisting of the same bricks. Milk I drank is not yet “Self”, but passing to the bladder it is no longer “Self”, a miniscule proportion of digestion becomes an integral part of the body, most of it is a liquid.

Even more difficult to find the second, inner boundary. The cognizing principle, the “Self” subject is in my cognizant body, for which the cognizing object is “non-Self”. Where is the boundary between the cognizing “Self” subject and the cognizant “non-Self” object? When the “Self” subject looks in the mirror, he sees his body there, his face, sees the cognizant object, but he cannot observe the cognizing beginning, the subject there. For a more careful examination of the “Self” location, you can resort to any powerful ultra-magnifiers, ultra-analyzers, ultra-loupes of time, but one can find the cognizing “Self” where it suggests to be. Only the flow of changing particles of a dead substance, the changing fields of the physical vacuum, stable protons and electrons wandering millennia in tortuous ways, interact with each other for a short time. When leaving a place that is our body, they dissipate forever, remaining dead and strange to each other as before, even after visiting the public thoroughfare, which is my body. The substance does not show any special physical signs while being in me, and even with a very large increase of it one cannot determine a distinctive line between the oxygen atoms of air located in the alveolar cavities of the lungs and the oxygen in blood. One cannot specify location and movement of the subatomic particles in this cycle, even in our imaginary “ultra-indicator”. The larger this imaginary increase is, the less hope that we can understand the reason why these dead protons, neutrons, and electrons realized their existence, realized that there are other protons, neutrons, electrons that are not a part of them, but in spite of it, they exist. Neither the matter having not yet entered the organism, nor the one having already left it, doesn’t take part in this process. We suggest that only a certain, large cluster of particles around of 1027 nucleons is necessary for occurrence of a phenomenon that is our consciousness.

Considering the internal boundary of an object that is adjacent to the external boundary of the subject, the question about the multiplicity of this boundary appeared, because a lot of subjects, beings with consciousness divide the world into their “Selves” and “non-Selves” on the same basis as I do. Their “Selves” are “non-Selves” for me and there is no reason to consider this as mistake. The boundaries of the “Selves” and “non-Selves” are “inner” boundaries of the universe, they formed and disappeared with the generations birth and death. What is a number, what is a measure determining the amount of “Selves” in the universe? Is there an integral internal boundary, is there an invariant of the reflection amount, consciousness, if a Life eternally fades and appears again somewhere in the space eras? The inner boundary duality of the universe is analogous to the duality of the metatheory truths, the semantic antinomies of which result their propositional dimension from the logical utterance. We assume the absolute identity of two objects, for example, balls, one of which is the right compared with the other that is left for the first one, but we deny the identity of two objects, for example, balls, one of which is the outer compared with the second one that is inside for the first ball, taking into account that right and left is the relative difference, and inner and outer is absolute difference. The concepts formation is connected with the distinctiveness of an object, with the establishment of its boundaries. Their absence deprives of concreteness, leads to contradictions and false statements.

1. Philosophy of INCARNATION. Part #1. EMBODIMENT procedure. “Implementation” into a body. 4

2. Philosophy of INCARNATION. Part #2. OBJECTIFICATION procedure. TV set and its «Self» 10

3. Philosophy of INCARNATION. Part #3. INSTALLATION procedure. Computer system and its “Self” 18

4. Philosophy of INCARNATION. Part #4. INCARNATION procedure. Introduction to “our” “Selves” 36

5. Philosophy of INCARNATION. Part #5. INCARNATION procedure. A Human Being and his “Self” 47 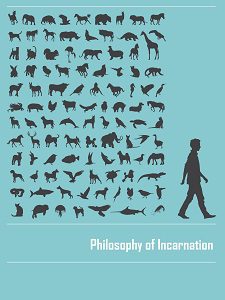 Want to read the entire volume? In the frame above you will find the full text of this volume. You can download it as a PDF file. Enjoy reading it!