“What is thy God? Are thy ambitions only set in whether ye shall eat tomorrow, or as to wherewithal ye shall be clothed? Ye of little faith, ye of little hope, that allow such to become the paramount issues in thine own consciousness! Know ye not that ye are His? For ye are of His making! He hath willed that ye shall not perish, but hath left it with thee as to whether ye become even aware of thy relationships with Him or not!”

The answer depends on our understanding of this word.

The sun was worshipped as God. It is the source of all organic life of the Earth and humankind. Everything would die without it.

This definition hints at existence of God.

Plato and Christians define the word God in another way. They consider God as love or to be more precise, those ideas that lead people and even all the living to goodness. If we don’t know these ideas now, it doesn’t mean that they do not exist in theory. So, God also exists.

From this point of view, people without love don’t believe in God and vice versa.

We can give another definition of the word God. God controls all of us, and our life and fate, the life and happiness of everything existing, suns and planets, the fate of everything alive and dead depend on His control.

And such God exists, because it is the Universe, it controls everything and determines the fate of all existing within its boundaries.

There’s no doubt that space environment is full of power and might. Suns were created of gaseous primitive matter. The Earth derived from one of these suns, plants – from the Earth, animals – from plants, a human being – from animals. After all, in the endless past everything has its own beginning from location and properties of the atoms, from the laws governing them. But all this doesn’t depend on us, on the contrary, we are dependent on all these things. A human being has reason and willpower thanks to animals that received everything from plants and so on. We don’t owe all these things; the Universe and its laws provide us with everything we have.

The space environment controls us, we are in its power.  There is no absolute willpower, we are puppets, mechanical dolls, automata, movie heroes…

Providing that God is some kind of a rational creature like a human being, but much more powerful and perfect, then we’ll talk about Gods, since in the Universe there are many of similar extraordinary and elevated animals of infinitely diverse ranks.

For example, the Earth is inhabited by extraordinary people, the so-called sages, geniuses, scientists. They lived in former times. The history reflecs these people. They cannot be compared with averagel people, since affairs they perform were unusually colossal. Their doings were immortal and beared eternal and never-ending fruits. Let’s revise Newton and his gravitational attraction, Laplace and his interpretation of the world system, the inventors of steam and diesel engines, turbines, etc. They made everburning contribution, didn’t   they? They live among us and we use their unquenchable stroke of genius.

But the humankind is making progress. One-celled animals were created of dead matter, then plants, then more and more complex, more and more cunning animals. As a result, a human being also was created. However, it wasn’t the last creation of nature, like a fish for example. A human being is the result of the constant development of a fish. The more perfect beings will derive from the human beings. Actually, nobody knows where is the end of their development.

A higher person could have better health, longevity, brilliant mind, technical power and so on, it’s beyond our control neither to forecast nor imagine everything.

It’s interpretation of Gods in THAT respect!

Many planets are older than the Earth. They have already succeeded in creation of these higher beings we could only dream of. Thus, the Universe is full of THEM. In space THEY are common phenomena. The small age of the Earth and similar planets inhabited by the immature population is an exception, the world is full of such Gods.

We can go on. Every mature planet reaches after unification, i.e. unification of its reasonable population. The best individual, in other words, the most perfect being runs the planet.

The presidents of the planets are Gods of the highest level.

All the planets of each sun are also united. This is the basis for existence of the rulers of solar systems – Gods of the third rank.

Thus, we must recognize the existence of many Gods of different ranks. The higher these Gods, the farther they are from a human being, the more inaccessible for him.

If we cannot imagine the future of a higher human being, initial God, then how can we understand the structure and qualities of Gods of the highest ranks, especially of the last, the highest ruler! Is it the space environment itself or some part of it, so to speak, a personal God (some kind of a higher imaginary person)? It’s hard to say.

Its forms, sizes, organs, properties, etc. are beyond our understanding. However, the Universe is infinite, so, there are numerous ranks of divine creatures.

1.1. Do Gods exist?
1.2. The difficulty of giving the common definition of GOD
1.3. The creation of strategies for giving definitions of such words as God or DIVINE creature (entity)
1.4. The plan for conducting the current research

2. THE STAGE №1 – Shaping the most general idea of God as an object on the basis of His NAMES (attributes, epithets, properties), presented in numerous religious teachings.

3. THE STAGE №2 – The development of a mathematical model of God on the basis of the mentioned before models from the previous Volumes

4. THE STAGE #3 – Finding compatibility between our mathematical model and the modern interpretations of the word God (searching for contradictions)
5. The modern relations between human beings and GODS

5.1. Whom were bisons a disturbing factor for?
5.3. Why are Gods inactive?
5.4. Who needs evidences and what kind of them to confirm the existence of Gods of the human beings?
5.5. Do the modern temporal or religious power need the Messiah?
5.6. People began to consider themselves as Gods

6. Russian folk wisdom about GOD (or wisdom containing this word)
7. Aphorisms about GOD
8. The additional words for better undertstanding of the word GOD
9. The summary of arguments for the existence of GOD 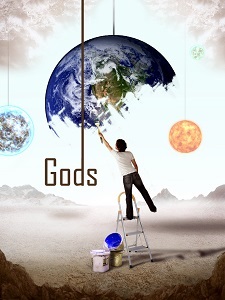